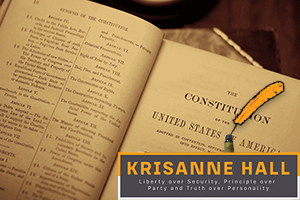 When a woman asked Benjamin Franklin, a founder of our Constitutional Republic, what kind of government the States created, he answered, “A Republic, if you can keep it.”  The key to keeping that Republic exists in the understanding how the Constitution was designed to function.

The Constitution of these United States is not arbitrary.   It is a document of standards established to keep the GOVERNMENT from becoming arbitrary.  These standards were not invented by the men who wrote the Constitution.  These standards were axiomatic truths that had proven themselves for over a millennium. Many of these truths can be found in five historic liberty charters, the very liberty charters that gave birth to America’s founding documents. The US Constitution is not an invention, it is an inheritance.  Those who claim that America’s Constitution is vague, arbitrary, or even irrelevant do so because they are uneducated about where our Constitution came from and why it was formed.

The US Constitution and the govt it created was designed to protect Liberty.   This purpose is declared in the Declaration of Independence.   It is recorded in the Pre-amble to the Constitution. And The Bill of Rights (the first 10 amds) was incorporated into the Constitution to trigger an alarm when this liberty is being threatened.  And yet, nothing in either of these three documents is an invention of the men who wrote them.  Everything, every principle of government, every security to Liberty, and even at times the very language itself was taken from lessons learned from over 700 years of history and five essential Liberty Charters.  It is this history that proves that the Constitution is not an arbitrary, living breathing document, but a document designed from blood-bought lessons in the historic struggle between liberty and tyranny.

Once this history is understood, today’s claim that the Constitution is irrelevant falls away and we begin to see not only how the Constitution is designed to limit government and preserve Liberty, but why we must adhere to this standard.  The living breathing deception can only exist by eliminating these historical truths and isolating men from their own history.

Originalism or original intent means looking at the history that gave us our founding principles and realizing why they are important, it means understanding the Constitution in its historical context. This is the only way to ensure that this government operates to preserve the essential principles of liberty, to ignore the origin of our constitutional principles is to invite the same threats that prompted the necessity of their protection.  To throw off the lessons of history invites despotism and inequality, apathy and corruption, slavery and oppression.  Our founders declared that anything beyond the Original Intent of the Constitution is simply unlawful, null, and void!

“There is no position which depends on clearer principles, than that every act of a delegated authority, contrary to the tenor of the commission under which it is exercised, is void. No legislative act, therefore, contrary to the Constitution, can be valid.” Federalist #78 (emphasis mine)

If we ignore that history and the Constitution in its proper context ceases to be the fixed standard for govt, then we are left to be ruled by the powerful or by the whim of the majority or by those at the controls of information who would distort history and truth.  If we do not know these essential principles of liberty and where they came from, we cannot evaluate and ensure the solutions are proper and not tragic.  Some call these unseen consequences, but when you can see through the lenses of history you know that they are no unseen; they are proven facets of human nature.

There is no magic pill.  History and truth tells us there is no quick fix.  If we truly want to make America great, we must reacquaint ourselves with some essential truths.  Without these foundational building blocks, we cannot achieve the successful ends we are all looking for and we continue to spin our wheels, haphazardly maneuvering government, sometimes to good ends, sometimes to destruction.  Our problem is that our policies are not driven by these foundational principles, but instead are driven by the phantoms of prosperity or security.  We must be vetting our representatives, cabinet members, and very importantly our Supreme Court justices by this standard.  If they do not measure up; if they only occasionally follow Original Intent or if the their application or definition of Original Intent waivers, they are not the solution- they are the problem.

Our Constitution is not arbitrary and neither are the solutions.  They are time tested and essential.  The designers of our Constitution put these solutions in our hands.  It was the greatest gift they gave us…the opportunity to self-governance.  It’s time we remember who we are and the power that we hold.  I am convinced that Reconnecting with this truth will reignite the lamp of liberty. Let’s learn from history so we will not be doomed to repeat its mistakes. Let’s stand for liberty today so our children will not have to bow tomorrow.