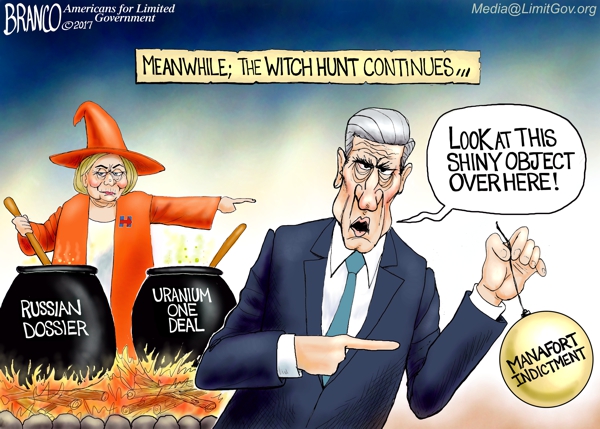 Something very disturbing happened on Tuesday that sent the media into a frenzy. On the same day, the Paul Manafort was found guilty on bank fraud and tax evasion charges a U.S. attorney once refused to bring, Michael Cohen pled guilty in a New York courtroom to charges that include tax and bank fraud and campaign finance allegations. The media crowed, “now we got him,” with all sights on President Donald Trump all day while pretending to be objective. All this latest episode does is show the world that as of right now, there is no equal application of the law in the U.S., and a second Special Counsel is needed to fix the problem.

Both prosecutions also show what is most important; the Special Counsel is not looking into Russian collusion. From the beginning, it was clear the investigation had little to do with Russia and the election and was nothing more than a political hit job by the swamp.

This is easy to prove Mueller is not investigating Russian election meddling because the investigation is not conducting the most basic tasks to prove meddling in the first place. To do that, the FBI must examine the DNC server to prove it was hacked. All there is now is the word of a third-party partisan firm, Crowdstrike, with a habit for blaming Russia for everything.

If Mueller truly wanted to investigate Russian meddling in the election, he would be looking at the sources for the Steele dossier to see if it was a disinformation campaign launched by the Kremlin. As far as anybody knows, that has not been done yet either.

If Mueller wanted to investigate what happened in the election, he would be questioning the numerous people that approached members of the Trump campaign with offers of “dirt” on Hillary Clinton. He is not doing that, perhaps because almost all the people have connections to the Clintons also.

Robert Mueller seems to be going out of his way to investigate everything except anything that will make the DOJ, FBI, and Clinton’s look bad. The American people see this and are now beginning to question if there truly is equal justice under the law. If the people lose faith in the justice system and believe the only thing that matters is the political designation next to your name, America will fail.

There is a way to fix the problem. Attorney General Jeff Sessions must appoint a Special Counsel to look at the crimes committed by the DOJ, FBI, and Clintons in the election. This Special Counsel must have the same powers as Robert Mueller does, and have the ability to pursue a crime where ever it is found. This includes decades-old tax problems or IT security issues.
Thanks to the Justice Department Inspector General report, the world knows the investigators displayed bias in the Hillary Clinton investigation. The only reason the IG didn’t declare the investigation tainted, was because there was no smoking gun email stating, “I am going to throw this investigation because of bias,” but make no mistake about it, there was plenty of evidence of bias. The media just refuses to report it. This would be the perfect place for the Special Counsel to start.

Before anyone says the IG already did a report, it is important to remember the IG does not put people before a grand jury, nor does the IG have the ability to call on people not in the DOJ. The Clinton investigation involved dozens of people not in the DOJ, including Hillary Clinton herself.

From there the new Special Counsel can move onto the crimes committed by the DOJ and FBI. Lying to the Foreign Intelligence Surveillance Court (FISC) is a crime. And as everyone has seen, the FISA application to spy on Carter Page was filled with lies. If anyone reading this submitted false information to a judge in court proceedings, there would most definitely be a price to pay.
Many people are going to ask the question, “Why can’t Rod Rosenstein just oversee an investigation?” Because the Deputy Attorney General himself signed on of the FISA extensions that had false information in it, possibly making him guilty of perjury. He cannot be trusted to lead an investigation in which he is a possible defendant.

From there, the Special Counsel could move onto the only foreign agent that has been identified to have played a role in the election, Christopher Steele, and Mueller indicting anonymous Russians that put up Facebook memes doesn’t count. Christopher Steele was a foreign agent that influenced what became a politicized yet official investigation into Trump at the behest of Trump’s political opponents. Not only that, it is believed some of his information came from Clinton hatchet men Sid Blumenthal and Cody Shearer.

Many have called for a halt to a second Special Counsel, hoping everything would eventually work out. The time has passed, and Americans for Limited Government President Rick Manning agrees, stating, “In the past, I have advocated patience with the Department of Justice as they pursue this matter through regular legal channels. They are out of time. America needs to know that there is equal justice under the law, and there is no reason to have any confidence that the Justice Department has the capacity or willingness to investigate itself and other agencies implicated through this scandal. It is time for a special counsel to focus on the Clinton and Obama side of the ledger where we know criminal activity occurred, in order to restore America’s faith that our justice system does not just go one way.”

If Robert Mueller was doing his job, Congress wouldn’t need to have hearings and threaten the Deputy AG with contempt. If Mueller was doing his job, he would have identified the crimes mentioned above and prosecuted them, but he didn’t because that was not his job. Robert Mueller’s job was to cover up for the DOJ and FBI, even if it means ignoring and participating in the ongoing coup attempt and shredding the U.S. Constitution. It is time for a second Special Counsel to do the job Robert Mueller won’t.