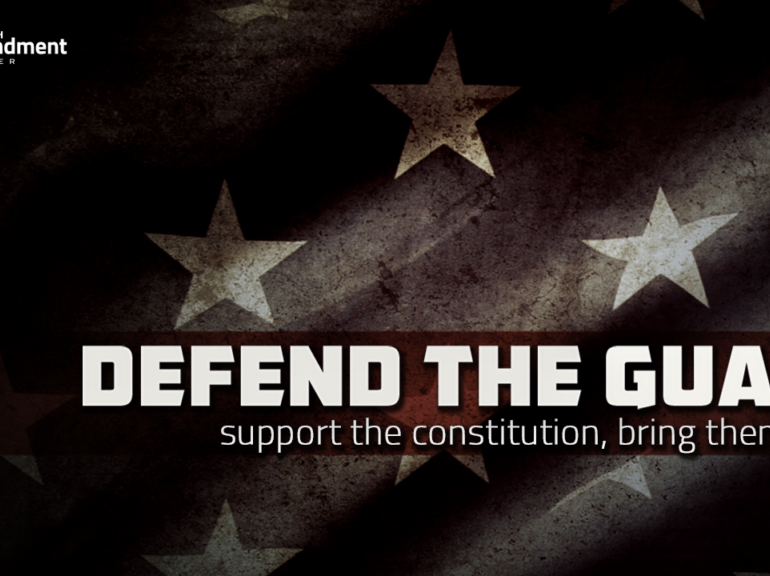 Presidential administrations come and go but the war machine churns relentlessly on. “Defend the Guard” legislation can throw a monkey wrench in its cogs.

Defend the Guard is a state-level bill that would stop the deployment of a state’s National Guard units unless specific constitutional criteria are met.

The legislation would prohibit the deployment of state Guard troops in “active duty combat” unless Congress has passed a declaration of war or taken official action pursuant to Article 1, Section 8, Clause 15 of the United States Constitution to explicitly call forth the National Guard for one of three enumerated purposes.

Passage of Defend the Guard would also force the federal government to only use the Guard for the three expressly-delegated purposes in the Constitution. And, at other times, the Guard would remain where the Guard belongs, at home, supporting and protecting their home state.

This would make it very difficult for the U.S. to wage unconstitutional wars.

Rep. Pat McGeehan (R-W.Va.) introduced an early version of the Defend the Guard bill in West Virginia in 2016.  He served as an Air Force intelligence officer in Afghanistan. In an article on this legislation, he pointed out the problems wrought by ignoring the Constitution.

“Discarding this constitutional first principle that helped forge the backbone of our own republic has resulted in grave consequences. Thousands of American lives have been lost in unnecessary foreign conflicts, devastating our military families while fatiguing our country’s defenses – all while draining trillions from the pockets of taxpayers.”

Guard troops have played significant roles in all modern overseas conflicts, with well over 650,000 deployed since 2001. Military.com reports that “Guard and Reserve units made up about 45 percent of the total force sent to Iraq and Afghanistan, and received about 18.4 percent of the casualties.”

Since none of these missions were pursuant to a Constitutional declaration of war or any of the three expressly-delegated purposes in the Constitution, the Defend the Guard Act would have prohibited those deployments of Guard troops.

The strategy is based on James Madison’s blueprint in Federalist #46  – a refusal to cooperate with officers of the union. The “Father of the Constitution” wrote that one state resisting an unconstitutional federal act would “create obstructions.” And if several states worked together, he said it would create “obstructions which the federal government would hardly be willing to encounter.”

Years later, Daniel Webster called on states to put Madison’s strategy into practice during the War of 1812, noting that is “one of the reasons state governments even exist.”

Webster made this observation in an 1814 speech on the floor of Congress where he urged actions similar to the Defend the Guard Act. He said, “The operation of measures thus unconstitutional and illegal ought to be prevented by a resort to other measures which are both constitutional and legal. It will be the solemn duty of the State governments to protect their own authority over their own militia, and to interpose between their citizens and arbitrary power. These are among the objects for which the State governments exist.”

Article I, Section 8, Clauses 15 and 16 make up the “militia clauses” of the Constitution. Clause 16 authorizes Congress to “provide for organizing, arming, and disciplining, the Militia.” Historically the militia was made up of every able-bodied man, as George Mason explained during the Virginia ratifying convention.

Through the Dick Act of 1903, Congress organized the militia into today’s National Guard. The reorganization limited the part of the militia that could be called into federal service to the Guard rather than the “entire body of people.”

Keeping strict limits on war powers was particularly important to the founding generation. James Madison warned that “no nation could preserve its freedom in the midst of continual warfare.”

The Constitution carefully separated the power to initiate war and the power to execute it. James Madison wrote in detail about constitutional war powers in his Letters of Helvidius.

Those who are to conduct a war cannot in the nature of things, be proper or safe judges, whether a war ought to be commenced, continued, or concluded. They are barred from the latter functions by a great principle in free government, analogous to that which separates the sword from the purse, or the power of executing from the power of enacting laws.”

Contemplating an offensive war with the Creek nation in 1793, George Washington summed it up succinctly in a letter to William Moultrie, emphasizing he would need congressional approval to initiate action.

The Constitution vests the power of declaring war with Congress, therefore no offensive expedition of importance can be undertaken until after they have deliberated upon the subject, and authorized such a measure.

It is this limited Constitutional structure that advocates of the Defend the Guard Act seek to restore by limiting the ability to wage war without proper constitutional debate and authorization.

McGeehan said the states have a powerful opportunity to force a return to the proper Constitutional operation of war powers.

“For decades, the power of war has long been abused by this supreme executive, and unfortunately our men and women in uniform have been sent off into harm’s way over and over. If the U.S. Congress is unwilling to reclaim its constitutional obligation, then the states themselves must act to correct the erosion of constitutional law.”