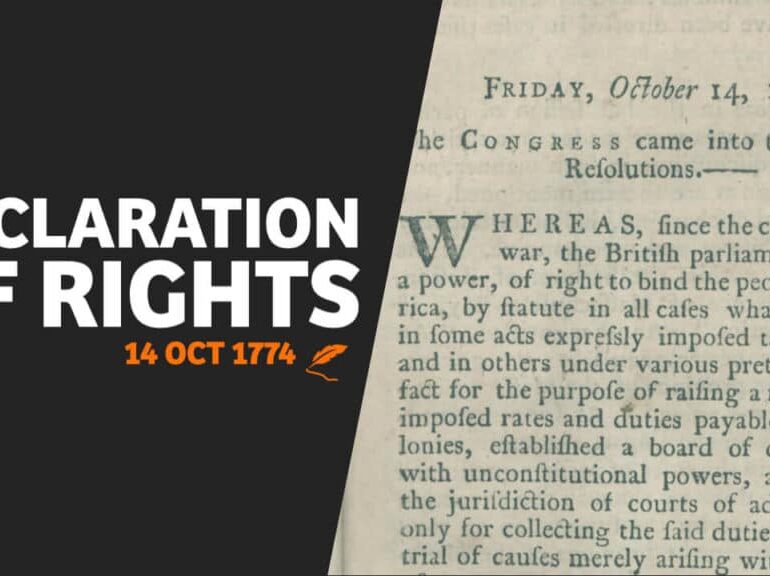 This declaration of colonial rights was in response to the “Coercive Acts.” The document set the stage for further colonial action resisting the British in the years leading up to independence. It also affirmed many principles and rights later incorporated into the U.S. Constitution and Bill of Rights.

The British Parliament passed a series of acts together known as the Coercive Acts in early 1774 to punish the colonies — particularly Massachusetts — after the Boston Tea Party. These acts included the Boston Port Act closing the Boston Port, the Massachusetts Government act stripping virtually all authority from the colonial government, the Administration of Justice Act stripping authority from local courts and authorizing trials to be held in Great Britain instead of Massachusetts, and the Quartering Act allowing British troops to take over private buildings.

The Declaration and Resolves adopted by the Continental Congress were an outgrowth of the Suffolk Resolves, adopted a month earlier by delegates at the  Suffolk County (Massachusetts) Convention of the Committees of Correspondence. This local protest against the “Coercive Acts” called for non-cooperation with British authorities and for direct action to oppose what it condemned as illegitimate and unconstitutional acts by Parliament.

Paul Revere rode to Philadelphia to deliver the document to Congress. On Sept. 17, Congress endorsed the Suffolk Resolves as a show of solidarity with the people of Boston. This also laid the groundwork for the Continental Congress’ own Declaration and Resolves just one month later.

After asserting colonial rights and “that the following acts of Parliament are infringements and violations of the rights of the colonists; and that the repeal of them is essentially necessary, in order to restore harmony between Great Britain and the American colonies,” the Continental Congress declared that the colonies “cannot submit.”  It also outlined three concrete actions the colonies would take to resist the Coercive acts.

“To these grievous acts and measures Americans cannot submit, but in hopes that their fellow subjects in Great-Britain will, on a revision of them, restore us to that state in which both countries found happiness and prosperity, we have for the present only resolved to pursue the following peaceable measures: 1st. To enter into a non-importation, non-consumption, and non-exportation agreement or association. 2. To prepare an address to the people of Great-Britain, and a memorial to the inhabitants of British America, & 3. To prepare a loyal address to his Majesty, agreeable to resolutions already entered into.” [Emphasis added]

An Early Bill of Rights

Significantly, the Declaration and Resolves of the First Continental Congress included a list of 10 fundamental rights. The Congress declared that it was its “indispensable duty to make the following declarations, of our humble opinions, respecting the most essential rights and liberties of the colonists.”

The Declaration wasn’t establishing new rights. It affirmed certain rights the colonists believed they had from the very beginning. In effect, the Continental Congress declared that “these are our rights. They are immutable and you cannot legitimately violate them.”

The first rights listed were the most fundamental and foreshadowed language Thomas Jefferson later included in the Declaration of Independence.

“That they are entitled to life, liberty, and property, & they have never ceded to any sovereign power whatever, a right to dispose of either without their consent.”

In the second two enumerated rights, the Declaration went on to assert that the colonists were entitled to “all the rights, liberties, and immunities of free and natural-born subjects within the realm of England,” and “they by no means forfeited, surrendered, or lost any of those rights, but that they were, and their descendants now are entitled to the exercise and enjoyment of all such of them, as their local and other circumstances enable them to exercise and enjoy.”

The fourth right drilled right down to the root of colonial opposition to British rule — Parliament’s usurpation of local decision-making.

“That the foundation of English liberty, and of all free government, is a right in the people to participate in their legislative council: and as the English colonists are not represented, and from their local and other circumstances, cannot properly be represented in the British parliament, they are entitled to a free and exclusive power of legislation in their several provincial legislatures, where their right of representation can alone be preserved, in all cases of taxation and internal polity, subject only to the negative of their sovereign, in such manner as has been heretofore used and accustomed.”

Rights five, six and seven build on number four. They assert that the colonists are entitled to English common law, the benefit of English statutes “as existed at the time of their colonization,” and “all the immunities and privileges granted and confirmed to them by royal charters, or secured by their several codes of provincial laws.”

The eighth right was later incorporated into the First Amendment.

“That they have a right peaceably to assemble, consider of their grievances, and petition the King; and that all prosecutions, prohibitory proclamations, and commitments for the same, are illegal.” [Emphasis added]

By calling “prohibitory proclamations” illegal, the Continental Congress took a subtle but revolutionary step. It asserted the colonists’ right to interpret the powers of Parliament in relation to their rights as British citizens. In effect, it placed the people over the government. This set the stage to resist those measures. In effect, this is the foundation for nullification of unconstitutional acts today.

The ninth right addressed the growing number of British troops quartered in the colonies, particularly in Massachusetts, declaring that “keeping a Standing army in these colonies, in times of peace, without the consent of the legislature of that colony in which such army is kept, is against law.”

Finally, the 10th enumerated right outlined a political concept that would later become an important constitutional principle – separation of powers.

“It is indispensably necessary to good government, and rendered essential by the English constitution, that the constituent branches of the legislature be independent of each other; that, therefore, the exercise of legislative power in several colonies, by a council appointed during pleasure, by the crown, is unconstitutional, dangerous, and destructive to the freedom of American legislation.”

The bill of rights section concluded by declaring these are the colonists’ “indubitable (unquestionable) rights and liberties; which cannot be legally taken from them, altered or abridged by any power whatever, without their own consent, by their representatives in their several provincial legislatures.”

The Declaration and Resolves set the stage for further actions to resist British actions down the road. But more than that, it began to establish and formalize longstanding political principles that would eventually serve as the foundation for the U.S. Constitution.

The principles of unalienable rights, government by consent, absolute limits on government power, and the right to resist usurpation serve as the bedrock for the American political system.