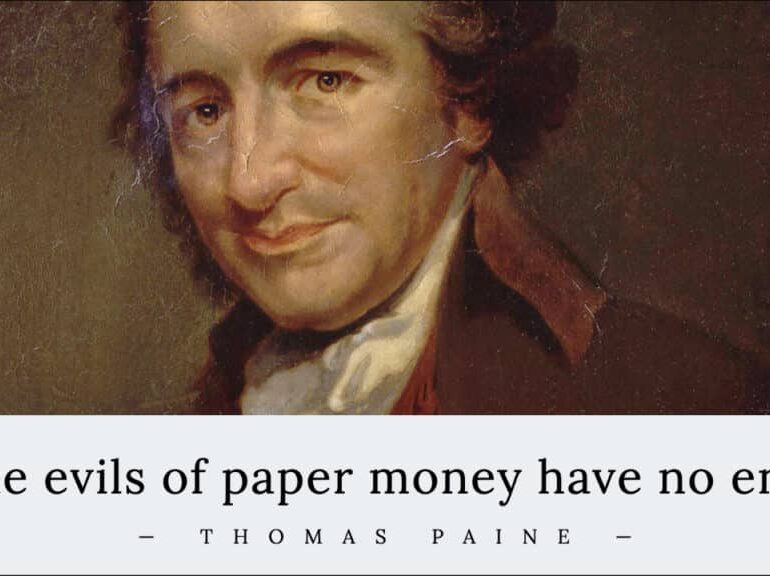 From the earliest days of the republic, politicians have used fear to expand government power. This was the strategy the Federalist Party used to get a standing army. Thomas Paine called them out on it.

The founding generation was extremely wary of standing armies. They lived through the tyranny of a British standing army on their soil. In his Political Observations, James Madison pointed out that from standing armies “proceed debts and taxes; and armies, and debts, and taxes are the known instruments for bringing the many under the domination of the few.”

During the debates over the ratification of the Constitution, many warned about the dangers of a standing army. George Mason put it most succinctly during the Virginia ratifying convention, saying, “But when once a standing army is established in any country, the people lose their liberty.”

Despite the warnings, the Federalist Party under President John Adams pushed for a standing army. Under his leadership, Congress significantly bolstered the peacetime army from 840 men to an authorized force of 10,000. In practice, the U.S. Army grew to 5,400 soldiers consisting of 12 infantry regiments, and six cavalry companies.

In an essay years later titled A Challenge to the Federalists published by the American Citizen on Oct. 17, 1806, Thomas Paine accused the Federalist Party of lacking principles, and he specifically criticized Federalist moves to establish a standing army while in power.

“The federalists, while in power, proposed and voted for a standing army, and in order to induce the country to consent to a measure so unpopular in itself, they raised and circulated the fabricated falsehood that France was going to send an army to invade the United States; and to prevent being detected in this lie, and to keep the country in ignorance, they passed a law to prohibit all commerce and intercourse with France.”

As Paine alludes to, the Federalists used an age-old political tactic to drum up support for a policy the public generally held in disdain. They appealed to fear – specifically fear of the French.

Politicians have long used fear to gin up support for unpopular causes. Adams himself understood this. In his Thoughts on Government, Adams wrote, “Fear is the foundation of most governments.”

In a letter to Thomas Jefferson, James Madison warned, “It is a universal truth that the loss of liberty at home is to be charged to the provisions against danger, real or pretended, from abroad.”

Paine took a dim view of Federalist motives. He said it was all about political power.

“As the pretence for which a standing was to be raised had no existence, not even in their own brain, for it was a wilful lie, we have a right to infer, that the object of the federal faction in raising that army, was to overthrow the representative system of government and to establish a government of war and taxes on the corrupt principles of the English government; and that, could they get again into power, they would again attempt the same thing.”

Paine argued that the Federalists’ continual aim “has been and still is, to involve the United States in a war with France and Spain.”

Even at this early point in American history, Hamiltonian nationalists who made up the Federalist Party were already enamored by the prospect of a consolidated government and power on the world stage. A standing army would make them a global player and shift more power from the states to D.C. They knew the average American wouldn’t support this scheme, so they used fear.

And the federal government is still using fear today.

During a speech at the Virginia ratifying convention, Patrick Henry warned that fear would turn free people into slaves.

“It is the fortune of a free people, not to be intimidated by imaginary dangers. Fear is the passion of slaves.”

We should heed his warning.