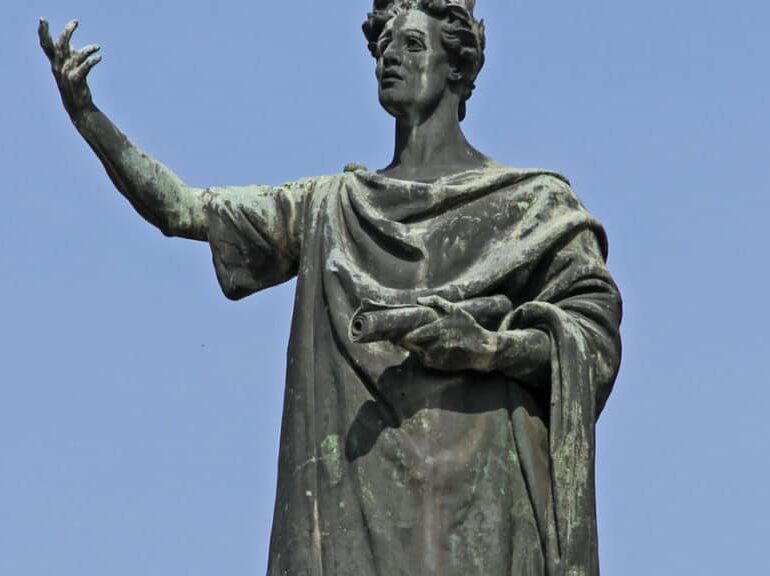 Answering Questions About This Series

Some questions have arisen on this series, which I think best to clear up now.

First: As the series title indicates, these essays are about the ideas contributing to the American Constitution, not about the goals of the American Revolution. The goals of the Revolution changed over time. At first, the revolutionaries sought to restore American freedom and self-governance within the British Empire. But within 15 months, the struggle had evolved into one for Independence and for a wider scope of freedom and self-governance. After the war was over, the revolutionaries’ new aim was to design a form of government—a Constitution—to preserve what they had won.

Second: I have been asked why I haven’t focused on the British and English contributions. Anyone familiar with my writing on the Constitution knows I give these very heavy weight. But this series is organized chronologically, so they will come later. Of course, the British and English traditions themselves were impacted by the thinkers profiled earlier in this series.

Third: It’s important to understand that the constitution-makers consciously balanced tradition with the lessons of history and political science. They didn’t simply replicate the British system (as Alexander Hamilton may have preferred). Nor did they discard tradition and create a government based on speculative philosophy (as Thomas Jefferson and the French Revolutionaries might have done). They actively chose to blend, in a phrase from The Epoch Times, both “truth and tradition” to create something new and better.

As noted in the second installment, the reverse side of the dollar bill reproduces the Great Seal of the United States. On the right is the front of the seal, which contains the Latin motto E pluribus unum—“out of many, one.” On the left is the back of the seal, which features two additional Latin phrases: Annuit coeptis and Novus ordo seclorum. The latter two are based on lines written by the Roman poet Virgil. More on that below.

Participants in the 1787–1790 constitutional debates mentioned three Roman poets. They were:

The poetry of Ovid was the lightest. Ovid wrote mostly about love and seduction, miracle and myth. His longest poem is “The Metamorphoses.” It tells stories of how mortals and gods were transformed into other shapes and other creatures. The “Metamorphoses” is a source for several modern fairy tales, including “Beauty and the Beast.”

Ovid’s work was incongruent with the serious subject of adopting a Constitution. It isn’t surprising, therefore, that the records of the constitutional debates don’t show him being quoted very often.

The poetry of Horace included reflections on daily life, satire, morality, philosophy, some erotica, and literary and political commentary. Horace also penned the Roman “national anthem,” the “Carmen Saeculare.” Much of his subject matter was suitable for constitutional discussion, and debate participants quoted him about a dozen times. However, the quotations generally were about subjects tangential to the central issues under discussion.

As for Virgil: If the American Founding had a poet laureate, he would be it.

Virgil was born in 70 B.C.E. near Mantua (Mantova), in northern Italy. It was an agricultural region, and the poet’s love for agriculture and the countryside shines from his verse.

Virgil wasn’t physically robust, and for much of his life he was painfully shy. He never married or participated in political or military affairs. He became a celebrity only because people were awed by his poetry.

He may have written some free-standing poems (if some of those attributed to him are, in fact, his), but nearly all his output was contained within three publications. The first, issued in about 37 B.C.E., is entitled “The Eclogues.” It’s a collection of 10 poems averaging 83 lines each.

Virgil occasionally inserted references to political events occurring outside the Eclogues’ rustic setting. For example, the fourth “Eclogue” told of the birth of a child who would introduce a new Golden Age. This commonly is called the “Messianic Eclogue,” and in later centuries many Christians became convinced Virgil had been divinely inspired to foretell the birth of the Christ child. This may be why Dante gave Virgil a leading role in his “Divine Comedy” (c. 1321).

A phrase from the Messianic Eclogue: magnus ab integro saeclorum nascitur ordo (“a great order of the ages arises anew”) was shortened for the Great Seal of the United States to Novus ordo seclorum—“a new order of the ages.”

Virgil’s second great work was the “Georgicon” (in English, “Georgics”). Its 2,188 lines celebrate agriculture and the countryside. (The Greek word georgos means “farmer.”) I find the Latin of the “Georgics” difficult because of its extensive use of agricultural technical terms. Despite that, the poetry sparkles.

Virgil’s magnum opus was the “Aeneid.” An epic of nearly 10,000 lines contained in 12 “books,” the “Aeneid” was modeled loosely on Homer’s “Iliad” and “Odyssey.” It begins with a furious storm that destroys much of the fleet of the Trojan hero Aeneas. The storm blows the surviving ships onto the shores of North Africa. Then in flashbacks the poem relates how, while the Greeks were sacking and burning Troy, Aeneas escapes with his father and son, led by a prophesy that they would found a new state in central Italy. Both before and after landing in Africa, Aeneas and his comrades are forced to wander throughout the Mediterranean world, undergoing all sorts of adventures.

Eventually, they arrive at their destination. They establish friendships, overcome resistance, and found the forerunner of the Roman state.

A prayer in the “Aeneid” included the line, Iuppiter omnipotens, audacibus adnue coeptis (“All-mighty Jupiter! Approve our bold undertakings!”). On the Great Seal of the United States it became a simple affirmation: Annuit coeptis—“He [God] has approved our undertakings.”

The American Founders could relate to Aeneas: He was a military hero, but not a cut-’em-up ruffian like Homer’s Achilles. He was reverent and dutiful (in Latin, pius). He sincerely tried to do the right thing. He was a George Washington sort of warrior.

The Founders also could relate to the plot of the “Aeneid”: Abuses by the ministry in London made them feel forced to flee the British Empire. They endured the fire of the Revolution, wandered politically during the Confederation years (1781–1789), and then created the institutions for a new nation.

In 19 B.C.E., Virgil became ill while on a sea voyage to Greece. He returned to Italy, but his health didn’t improve. He considered the nearly complete “Aeneid” to be too unfinished for publication, so he ordered that after his death it be destroyed.

To the heartfelt gratitude of present and future generations, the Emperor Augustus countermanded the order. Augustus understood that Virgil had grossly underestimated the quality of his own work. The few areas in which the “Aeneid” appears unfinished are insignificant.

Virgil’s creations remain very much with us today. View a film like Disney’s “Fantasia,” and you will see pastoral characters from right out of the “Eclogues.” Mention a “Trojan horse,” and you are referring to an episode, not from Homer’s epics, but from the “Aeneid.”

The Power of Virgil’s Poetry

Virgil’s poetry was an immediate hit with the Roman public, and has remained a hit for over two millennia. His “heroic meter”—six feet per line with two or three syllables per foot—is perfectly adapted to his subject matter. Although rhyme is not really called for in Latin, Virgil paid careful attention to the resonance of words, with incredible effect.

For example, in the “Aeneid” he describes a monstrous whirlpool as a vorans vortex, pronounced “wor-ans wor-tex.” You can hear the “wor’s” mimicking the power of the water. In describing Neptune’s chariot, Virgil employs clicking “t” and “k” sounds to represent the flicking of reins.

One of my favorite passages relates the hero’s shadowy descent into the underworld. The lines are filled with “o” and “oo” sounds, all black-and-purple ooze, chill and mystery: Ibant obscuri sola sub nocte per umbram—“darkly they pass through gloom, covered by lonely night.”)

Obviously, no translation captures the power of Virgil’s poetry. As a young man I read an English version, but I was well into my thirties before I was equipped to read it in Latin. When I finally did, I was totally unprepared for what I found.

And in all the years since, I still never have.

Next installment: Virgil in the constitutional debates.