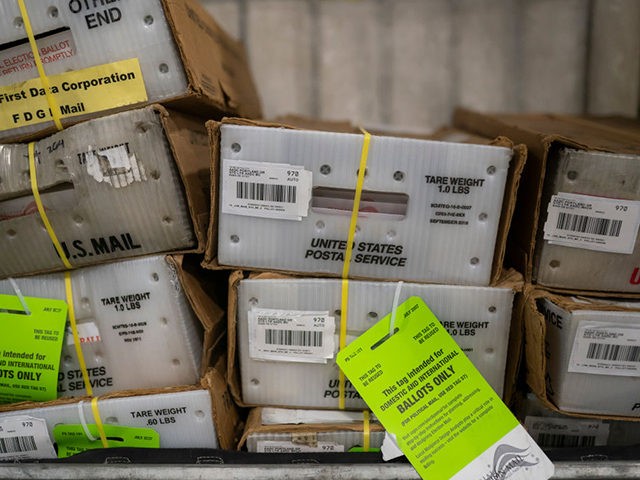 Democrats claimed “Russian interference” in 2016, though there turned out to be no actual “collusion,” and the actual effect of (small) Russian troll farms and alleged email hackers was difficult to determine.

The sad reality is that there are already legal ways for partisan actors to interfere with the election.

By far, the biggest factor in the 2020 presidential election seems to have been vote-by-mail, which is linked to six of the seven methods below.

Democrats pioneered the use of vote-by-mail to turn out their own voters in a judicial election in Wisconsin in April, then went on what that New York Times called a “a virtual nationwide tour, extolling the virtues” of the system. They planned lawsuits and pressure campaigns to force key battleground states to adopt the new voting system.

(A key figure in that effort, attorney Marc Elias, is also the operative who funded the “Russia dossier.”)

Republicans prefer to vote in person, especially because of the secret ballot, which vote-by-mail compromises.

In a time of “cancel culture” and rioting, it is easy to understand why Republicans prefer to show up in person, coronavirus or not.

Vote-by-mail also put President Donald Trump in an impossible position. He predicted that Democrats would use the system to do exactly what they did — to turn out their vote and put the outcome in doubt.

The danger, however, of criticizing vote-by-mail was that Trump risked suppressing his own turnout, particularly among seniors afraid of voting in person. So he had to encourage people to use it anyway.

And when he complained about the system, he was fact-checked by media and censored by social media companies.

Here are seven ways the vote is tilted.

Actual voter fraud, though relatively small in scale, includes voting twice; dead people voting*; filing out ballots for other people; “losing” ballots before they are counted; and so on. An unnamed political insider explained to the New York Post before the election how he once did it, and trained others to do it, with mail-in ballots. “An election that is swayed by 500 votes, 1,000 votes — it can make a difference,” he told the Post. “It could be enough to flip states.”

Ballot harvesting involves using third parties to collect an unlimited number mail-in ballots from other people. It has been legal in California since 2016, and Democrats used it effectively in 2018, delivering hundreds of thousands of ballots that way. (Republicans have tried, and failed, to copy them; GOP voters don’t part easily with their ballots.) Democrats want to legalize ballot harvesting nationwide. In several states, Democrats sued to let it happen; in Michigan, it was allowed briefly.

Several states — including Republican-governed states — allow voters to “cure” problems with absentee ballots — such as a missing signature — then re-submit them. Democrats are literally going door-to-door right now in closely-contested Georgia, asking “absentee” voters, in person, to “fix” their ballots. Democrats also sued in Arizona for a list of names of voters whose ballots needed “curing,” probably so they could focus on likely Democratic voters. They lost, but that is their strategy.

Democrats sued in several key battleground states to force states to extend the deadline for mailed-in ballots to be counted past Election Day itself. They won in several states; they lost in several states. In North Carolina, they reached a deal with the Democrats who run the state’s election board. In Pennsylvania, the U.S. Supreme Court split 4-4 (before Amy Coney Barrett’s confirmation), allowing the state’s new rules to stand.

Some states, like California, decided to send vote-by-mail applications to every registered voter in the state, whether it was constitutional or not. The most striking thing about some of these efforts is that they were federally funded. The CARES Act, for example — the first coronavirus relief package — paid for states like Wisconsin to send information packets to millions of registered voters — in effect, a federally-funded voter turnout operation.

The decision of Silicon Valley companies to censor information during the election had a profound effect whose true impact may never be fully known. Twitter regularly censored the president, and the New York Post‘s reporting on Hunter Biden and Joe Biden. Google suppressed search results for Breitbart News. Now they slap “nutrition labels” on articles about voter fraud. This is a form of election interference that will likely continue.