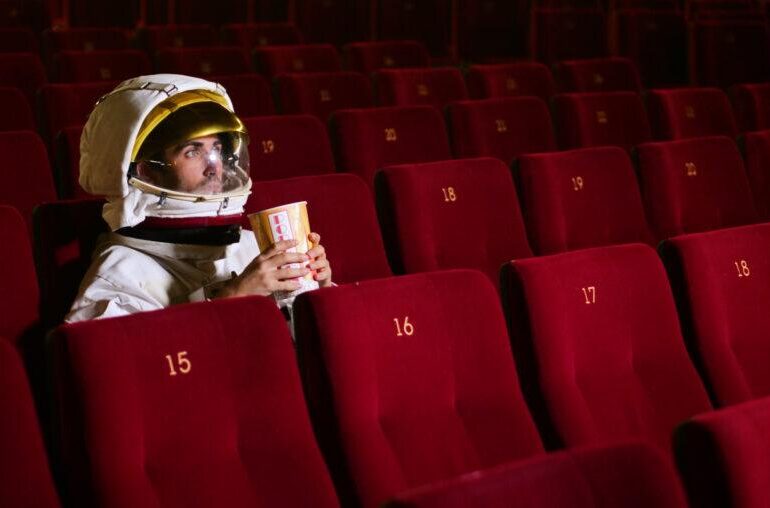 After the start of the Covid pandemic, my local Harris Teeter grocery store in Montgomery County, Maryland made extensive changes, including placing eight-foot high plexiglass screens between every one of its nine self-service checkout stations. However, a few months ago, one panicky customer complained to the local health department that he felt unsafe at the store. A health inspector swooped in and threatened to shut down the grocery store unless they blocked access to a third of their self-service checkouts. As a result, the store now sometimes has long lines of people waiting to check out and presumably increasing their exposure to Covid while tarrying.

The inspector also forced the store to designate one of its two eight-foot wide entrances, each with a sequence of two automatic opening doors, as an “exit only.” The store initially taped a few little “exit only” signs to the exterior. A few weeks later, a county inspector returned to the scene (maybe sparked by another local resident who forgot to take their Xanax before shopping?) and issued new commands to the store. The result: now the doors are plastered with at least four “exit signs” as well as a three-foot high folding “exit” sign close enough to trip people who weren’t paying attention.

This is pure Pandemic Security Theater. If people could catch the virus from passing momentarily in a wide doorway, then all the grocery store clerks as well as most subway and bus passengers would have been struck down by Covid long ago.

On Thursday, I was making a quick mid-afternoon run to that store and headed for the doors I always used adjacent to the parking lot. I saw a customer getting ready to exit so I paused 10 feet away from the door. He was pushing his loaded grocery cart through the double set of doors – until he saw me. He instantly pulled his cart back and the second set of automatic doors closed while he stared at me like he’d seen a viral demon poised to strike him down.

From safely behind the glass doors, he anxiously pointed his arm to the other side of the store, where the designated ‘Entrance Only” signs paved the path to compliance.

I just stood there.

He pointed again, even more fretfully.

I just stood there.

He finally pushed his cart forward and the automatic doors opened.

“THIS IS THE EXIT – exit only!’ He exclaimed.

“Ya,” I replied nonchalantly as I waited for him to get out of the way so I could enter.

“That’s not allowed,” he declared.

“The separate exit and entrance for the store is a health department dictate that makes no sense.”

And so on it went. If you live in a lockdown state, you know the routine, the conflicts, the arguments, the bitterness, the mutual suspicions and wrangling that have eroded trust and social cohesion.

My hunch that county inspectors were pulling their edicts out of their ears was confirmed when I visited a new Barnes and Noble bookstore. In the first weeks after opening, customers traipsed in and out of the store through two wide automatic doors roughly 100 feet apart. But shortly before Christmas, I was surprised to see one door blocked shut and a line of customers waiting outside the other door. I chatted up the Barnes and Noble staffer standing guard outside that lone door. The county had restricted the number of people inside the bookstore. To keep precise count of customers entering and exiting, everyone had to pass through the same door. When I mentioned to the staffer that Harris Teeter had been forced to adapt the opposite “solution,” he just shrugged and said Barnes and Noble had to follow health department rules.

Montgomery County, MD is an epicenter of servility. As long as county politicians and bureaucrats recite their devotion to “science and data,” residents will submit to any government command. While private schools are thriving in the county and students remain healthy, county officials just announced that public schools will remain locked down until at least mid-March. Covid restrictions have wreaked vast economic wreckage in the private sector but that’s not a problem because most of the affluent residents work for the government or government contractors. The county recently banned indoor dining, abolishing many service sector jobs and further devastating low-income minorities congregated in the eastern part of the county. The endlessly multiplying government restrictions and prohibitions failed to banish the virus: more than 50,000 residents in the county of a million people have tested positive and more than 1,100 have reportedly died from Covid.

The pointless disruptions have done nothing to damage the prestige of government in this neck of the woods – or in much of the nation. Instead, many Americans feel entitled to denounce anyone not complying with the latest edict as if they had been caught planting a pipe bomb under a school bus. Governments have encouraged people to become vigilantes, setting snitch lines that have been flooded with reports of people failing to obey the latest revised social distancing and “stepping outside your damn house” mandates.

Happily, not everyone is bowing. “New York City’s online reporting system that allowed users to text photos to officials of anyone caught breaking social-distancing rules was temporarily shut down after being inundated with obscene images and complaints that it encouraged an authoritarian-like system of snitching,” the New York Times reported. Unfortunately, there is no official data to track trends in the number of snitches nationwide.

After ten months of lockdowns and shocking degrees of economic and social carnage, millions of Americans have decided that there surely must be some rationale for all the insanity and have signed on to become enforcers themselves, even and perhaps especially when the rules make no sense at all. The lockdowns have unleashed this mess. It is not easily cleaned up. It will likely take years before many people can think clearly and rationally again.