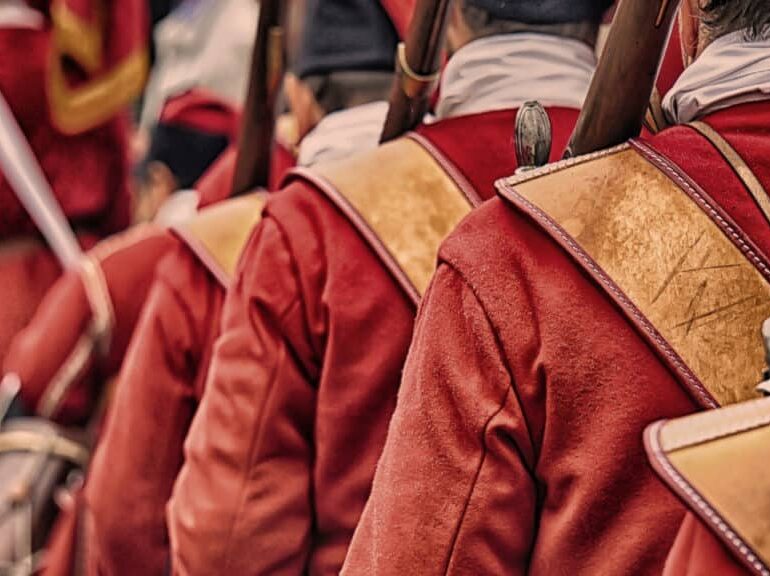 Most people are familiar with the Boston Tea Party, but not a lot of people know about the aftermath, and how that experience helped shape the Constitution and the Bill of Rights.

Although British attempts to confiscate arms and munitions directly triggered the initial battles in the War of Independence, there were numerous acts committed over the years leading up to it that convinced American colonists that separation from the motherland was necessary.

Among these were four laws passed by the British Parliament in response to the Boston Tea Party, including the Quartering Act, passed on June 2, 1774.

Quartering refers to the billeting (housing) of soldiers in areas where they are stationed. Unlike today’s military, there were no permanent bases in the Colonies to speak of. There may have been local barracks or forts, but they were generally inadequate to house all of the troops in a given location.

“The inability to effectively house troops in North America had been a long-standing issue. Troops were often billeted far from the areas in which they operated, making it difficult for the army to exercise effective control over the colonists.”

Although the Declaration of Independence claims that King George III forced colonists “to house foreign troops in our homes,” Massachusetts historian J. L. Bell argues that the real issue over the Quartering Act was not, as commonly believed, the violation of private and occupied homes. Rather, it was a violation of property rights, it created an “unfunded mandate” for local governments, and usurped local autonomy.

Reflecting on the 1765 Quartering Act, he writes:

The first and most important part of this law required local authorities to ‘quarter and billet’ royal troops ‘in the barracks provided by the colonies.’ Because of the long string of wars with France and the militia system, most large port towns colonies had such barracks.

Bell explains that if no such barracks were available, the law required local authorities to find soldiers accommodations in inns, livery stables, and taverns.

“The first two types of buildings were already taking in guests and their horses. All the liquor-selling establishments described by the law were licensed by the local authorities, so they were already beholden to the state and receiving the public. They were ‘public houses,’ in the period parlance.

“Only after all those possibilities were exhausted, and only after jumping through a set of legal hoops that would take several breaths to describe, did the authorities have the power to requisition ‘uninhabited houses, outhouses, barns or other buildings.’ The law said nothing about inhabited houses.”

In a second article, Bell explains further that the Quartering Act of 1765 imposed an “unfunded mandate” on colonial and local governments. The law required these local governments to provide resources for an imperial government initiative that they didn’t want and couldn’t control.

History Professor Gordon S. Wood at Brown University writes that “the colonists were required to furnish provisions and necessaries for the troops, including firewood, bedding, and beer. The colonies, particularly the province of New York, objected to this act, especially as it obliged them to raise money to support the soldiers without the consent of their provincial legislatures.”

This didn’t change with the 1774 Quartering Act, though Bell writes that the law “did give even more decision power to authorities appointed in London. Colonial leaders had a real quarrel with that.”

The American Battlefield Trust notes that “this only further enraged the colonists by having what appeared to be foreign soldiers boarded in American cities and taking away their authority to keep the soldiers distant.”

In other words, the Quartering Act of 1774 represented the usurpation of decentralized authority, and allowed appointed officials unaccountable to the locals to determine where troops would be billeted.

This appears to have left a bitter taste in the mouth of the people in Massachusetts, enough so to include an anti-quartering provision in its Constitution of 1780.

“In time of peace, no soldier ought to be quartered in any house without the consent of the owner; and in time of war, such quarters ought not be made but by the civil magistrate, in a manner ordained by the legislature.”

This might appear to vindicate the belief that redcoats were stationed in occupied homes, but Bell writes that this confuses the meaning of words today compared to then:

“There is a legal difference between ‘owner’ and ‘inhabitant,’ of course. The term ‘house’ was used in the 18th century for a great many buildings, not just those where people lived (though people often lived in the same buildings where they worked, fogging the boundaries). So this constitutional provision did probably go against some of the Quartering Acts’ statements about unoccupied buildings. But I think it reflected a broader American (and British) conception of a man’s home as his castle rather than specific prewar grievances.”

Bell’s excellent research might lead one to think the Third Amendment in the Bill of Rights concerned “unfunded mandates” rather than the violation of hearth and home, that it concerned property rights and local autonomy rather than personal privacy.

However, this conclusion would presume that the Third Amendment was inspired specifically by qualms over the Quartering Acts. Statements made at the time of the amendment’s adoption makes it clear this wasn’t the case. The fears of many, especially anti-federalists, were far more comprehensive.

That fear was not just having a military force taking over unoccupied buildings, but how the accommodation of its existence would lead to the erasure of liberties, including the violation of one’s private residence.

Put differently, the dangers of a standing army as a threat to other liberties inspired much of the Bill of Rights. The Third Amendment sought to protect from such an army private property, privacy rights, and separation of political power, while the Second Amendment was written to ensure defense and civil order would be maintained by local militia, not a permanent military force.

In conclusion, backlash over the 1774 Quartering Act wasn’t just due to the injustices actually realized by colonists. More broadly, it was a wariness about how one injustice leads to another.

What most people think occurred under the Quartering Act didn’t happen, but the Third Amendment was written by those who understood how violating property rights in that manner to accommodate a standing army would easily lead to the greater loss of rights, perhaps forever.