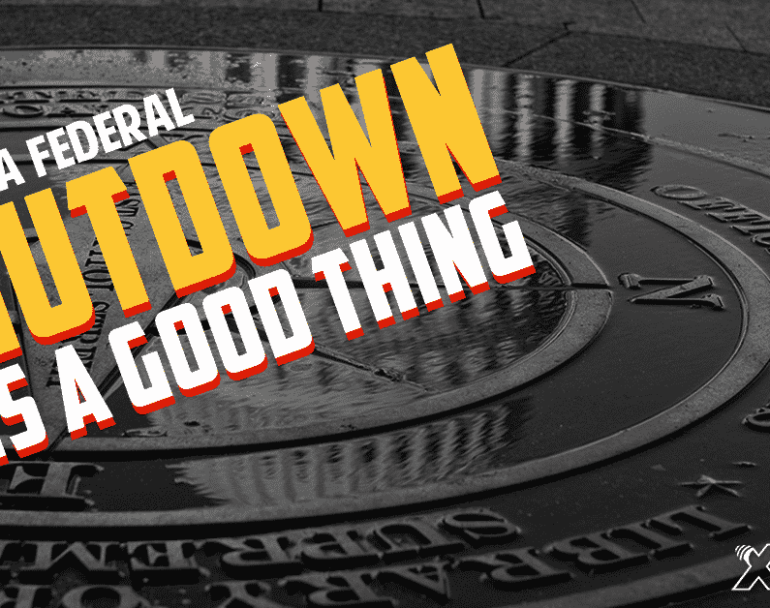 We are now more than a month into the government shutdown.

In fact, I’m living life pretty much just like I did before the shutdown. Amazingly, society hasn’t collapsed yet. It’s almost as we don’t really need the federal government in our lives.

In all seriousness, we like to joke about the irrelevance of the government shutdown, but in truth, it is having an impact on a lot of people. For instance, my wife has a friend who is trying to close on a house. They can’t do it because some federal bureaucracy has to check off on the loan. I’ve also read that the FDA has had to stop doing a lot of its meat inspections. And you have probably read about the travails of TSA agents working without pay. Many simply aren’t showing up to work and that means long lines at airport security checkpoints.

That’s the great lesson of the government shutdown. If the federal government wasn’t doing all of these unconstitutional things, a government shutdown would be truly irrelevant. Meat would still be getting inspected. Airport security would be humming along just fine. My wife’s friends would be closing on their house.

One of the beauties of the constitutional system is its decentralization. In a decentralized system, you have redundancy. If the federal government wasn’t imposing one-size-fits-all solutions on virtually everything, we wouldn’t be dependent on the feds to get our meat inspected. We wouldn’t have to depend on bureaucrats in Washington D.C. to process a home loan. And we wouldn’t need TSA gropers to have “adequate” airline security. State governments could deal with these issues – as was intended. Or even better, markets could handle these things and we would have true competition. These things would get done and they would get done better.

The bottom line is the feds aren’t authorized to do any of these things. During the ratification debates, Tench Coxe wrote a series of essays that emphasized the limited nature of federal authority. You can read about all of the things he promised the feds would never be involved in HERE.

The government shutdown teaches an important lesson: we’d be a lot better off if we’d stuck to the constitutional system.