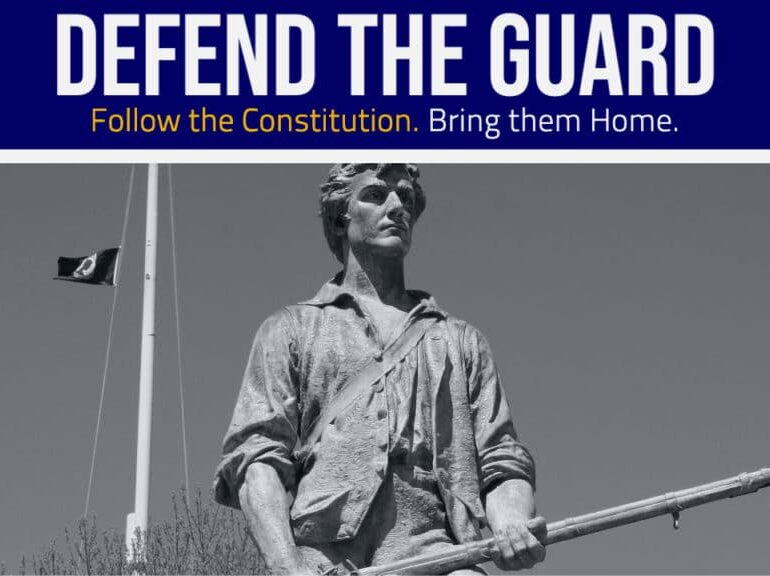 FRANKFORT, Ky. (March 8, 2022) –  A bill filed in the Kentucky Senate would require the governor to stop unconstitutional foreign combat deployments of the state’s National Guard troops. Passage into law would take a big step toward restoring the founders’ framework for a state-federal balance under the Constitution.

Sen. Adrienne Southworth (R) introduced Senate Bill 335 (SB335) on March 3. Titled the Defend the Guard Act, under the proposed law, the Kentucky governor could not release the state’s National Guard units into “active duty combat” unless the federal government has satisfied any outstanding balance to the Kentucky National Guard and Congress has “passed an official declaration of war or taken official action pursuant to Article 1, Section 8, Clause 15 of the United States Constitution to explicitly call forth the Kentucky National Guard and any member of the Guard for enumerated purposes to expressly execute the laws of the Commonwealth, repel invasion, or suppress insurrections.”

Under the law, “active duty combat” would be defined as any of the following actions.

The bill is identical to HB360 in introduced in the House by Rep. Mark Hart.

National Guard troops have played significant roles in all modern overseas conflicts, with over 650,000 deployed since 2001. Military.com reports that “Guard and Reserve units made up about 45 percent of the total force sent to Iraq and Afghanistan, and received about 18.4 percent of the casualties.” More specifically, Kentucky National Guard units have participated in missions in Iraq, Afghanistan,  Kosovo, Africa, and elsewhere.

Since none of these missions fall under the three criteria constitutionally necessary to call up the militia, the Kentucky Defend the Guard Act would have prohibited those deployments.

Article I, Section 8, Clauses 15 and 16 make up the “militia clauses” of the Constitution. Clause 16 authorizes Congress to “provide for organizing, arming, and disciplining, the Militia.” Through the Dick Act of 1903, Congress organized the militia into today’s National Guard, limiting the part of the militia that could be called into federal service rather than the “entire body of people,” which makes up the totality of the “militia.” Thus, today’s National Guard is governed by the “militia clauses” of the Constitution, and this view is confirmed by the National Guard itself.

Clause 15 delegates to Congress the power to provide for “calling forth the militia” in three situations only: 1) to execute the laws of the union, 2) to suppress insurrections, and 3) to repel invasions.

The founding generation was careful to ensure the president wouldn’t have the power to drag the United States into endless wars. James Madison made this clear in a letter to Thomas Jefferson.

The constitution supposes, what the History of all Governments demonstrates, that the Executive is the branch of power most interested in war, & most prone to it. It has accordingly with studied care, vested the question of war in the Legislature.

Congress has abrogated its responsibility and allowed the president to exercise almost complete discretion when it comes to war. Passage of Defend the Guard legislation would pressure Congress to do its constitutional duty.

West Virginia Rep. Pat McGeehan served as an Air Force intelligence officer in Afghanistan and has sponsored similar legislation in his state.

“For decades, the power of war has long been abused by this supreme executive, and unfortunately our men and women in uniform have been sent off into harm’s way over and over,” he said. “If the U.S. Congress is unwilling to reclaim its constitutional obligation, then the states themselves must act to correct the erosion of constitutional law.”

Passage of Defend the Guard would also force the federal government to only use the Guard for the three expressly-delegated purposes in the Constitution, and at other times to remain where the Guard belongs, at home, supporting and protecting their home state.

While getting this bill passed won’t be easy and will face fierce opposition from the establishment, it certainly is, as Daniel Webster once noted, “one of the reasons state governments even exist.”

Webster made this observation in an 1814 speech on the floor of Congress where he urged actions similar to the Florida Defend the Guard Act. He said, “The operation of measures thus unconstitutional and illegal ought to be prevented by a resort to other measures which are both constitutional and legal. It will be the solemn duty of the State governments to protect their own authority over their own militia, and to interpose between their citizens and arbitrary power. These are among the objects for which the State governments exist.”

SB335 is currently in the Senate Committee on Committees. The committee needs to assign the bill to a standing committee for a hearing and a vote. The bill must pass by a majority vote before moving forward in the legislative process.