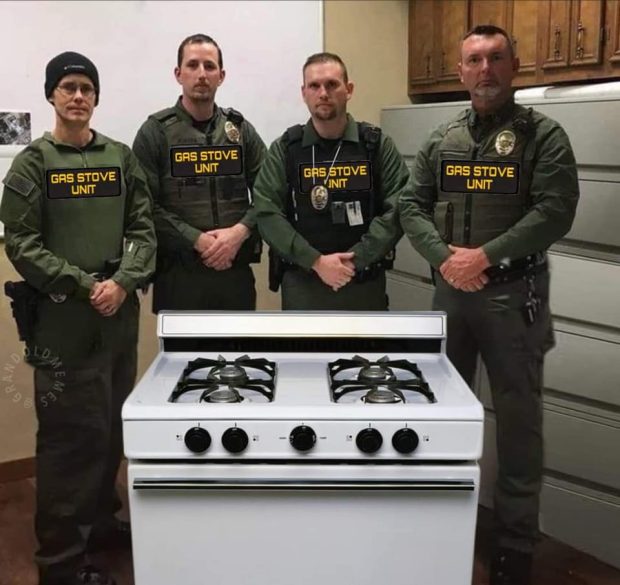 Sorry Paul Craig Roberts, but this is not the tyranny of good intentions. This is purposeful tyranny conducted in the name of destroying western civilization. And yes, the gas stove is a pillar of the glory of western civilization. Gas stoves are the choice of great chefs and home cooks all over the world, and that is indisputable.

Of all the governmentized legal toxins in our lives, from pharmaceuticals, plastics, chemtrails, EMFs, chemicals, 4G/5G, processed-chemical foods, food coloring, industrial meat products, GMOs, and geoengineering of the weather, gas stoves somehow stand tall as the evil monster above all the others. The con job claim here is that suddenly, after 100+ years of existence, gas stoves cause respiratory issues. Oh, and here’s this quote:

A more recent study by The the International Journal of Environmental Research and Public Health concluded that as much as 12.7% of childhood asthma can be attributed to gas stove use.

The 16-month Harvard study published on June 28, 2022, in the journal Environmental Science & Technology took samples from 69 stoves in homes serviced by three different natural gas companies across the Boston area. Testing of the precombustion (unburned) methane gas found over 300 chemicals, including 21 airborne toxins. Those toxins notably included low levels of benzene, a known carcinogen, which was discovered in 95% of the natural gas tested.

So, once again the Cult of Un-science is falsifying science in order to blame human illness on trivial things such as stoves. This is the same tactic used by The Vaccination Complex to place blame on [ insert anything here ] for all of the injuries and death from the experimental gene therapy. Invoking the children, apparently, works well with long-stretch asthma causation, but shoving untested poisons deemed “vaccines” into the bodies of humans, resulting in mass murder, somehow evades the causation theory. Therefore, ban gas stoves but keep the “vaccine” flowing.

Meanwhile, the Left has moved swiftly into action to build the case that the “Right”, in its usual looney way, is off of its rocker regarding the possibilities for attempting a ban on gas stoves. Never mind that the lead author of the “study” that set off this latest hornets nest in favor of the ban-everything culture, Talor Gruenwald, comes from Rewiring America, an organization of fruitcake climate change warriors dedicated to eliminating fossil fuel. Gruenwald is also a lead warrior for RMI (Rocky Mountain Institute), another anti-civilization alliance claiming a zero-carbon future.