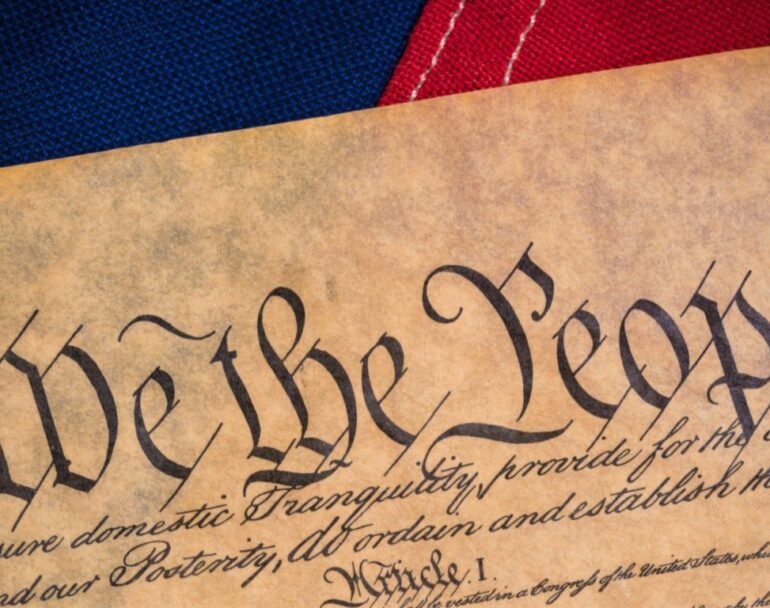 The telos, or final cause of the American regime, according to the prophets of the Common Good, descends like a vision from God, telling us precisely how our society ought to be ordered. They invoke telos to justify transformative arguments about the American Constitution, using broad language in the Preamble to interpret and circumscribe the document. Telos’s power, they argue, derives not just from words, but from intellectual tradition. Telos is important for Aristotle and Aquinas; a classical provenance for “classical lawyers.”

When scrutinizing arguments about telos, we find something missing: a definition. Thinkers throw the term around casually, as if it were self-explaining. The final cause is unfortunately not self-explanatory. It’s not even the only cause. There are four causes in Aristotelean philosophy. This omission is serious, for when analyzed properly, it’s far from clear that our constitutional order bends towards the Common Good writ large, but rather enables individuals to realize it on their own. This distinction contains a serious difference.

To understand the error, we must review Aristotle’s whole concept. Aristotle asserts in Posterior Analytics that knowing a thing is knowing its causes, for causes make a thing itself and none other. Knowing a thing’s uniqueness is essential lest we confuse one thing for another, blunting both use and analysis.

The final cause gets pride of place not just among Common Gooders. Aristotle spends considerable time discussing it for two reasons. First was the concept’s novelty: previous to Aristotle, Greek philosophy lacked the idea of an end to which things moved, recognizing only the immediate causes. The second was that in analyzing phenomena, the final cause helps to predict the others since they work to realize it. In terms of the thing itself, all four causes share equally in its being. In the theological terms popular among the new conservative movement, the causes function as hypostases underlying a thing’s existence.

When our would-be Aristotelians discuss only the final cause, we get short shrift. Fortunately, we can correct their error, demonstrating how mistaken they are about the American Republic’s final cause.

The American Republic’s four causes are:

I don’t think the first two will be controversial. The third might but won’t affect my argument. The rub lies in the final. To understand why ordered liberty is our Republic’s final cause, not the Common Good, we review the causes.

The American state exists only insofar as its institutions and people do. Its active component, which gives it tangible existence, is government. Unlike a table, one cannot point to a physical manifestation of government, so its materiality is different. Government consists of individuals acting through institutions bound into formal arrangements giving the whole cohesive reality, enabling its wielding power as a unit. Such substantiality, insofar as it exists, doesn’t emerge alone. It requires cooperation among its members, which only a plan can facilitate. That plan is the Constitution, which forms the government by outlining its bodies and delineating its power.

The Republic is far more than just a government. It’s the “public thing” supported by and comprised of the people. If it were a direct democracy, with all the people participating in government, its Efficient and Material Causes would be the same, but they aren’t. Its Efficient Cause is broader than the Material because people vote to select their leaders while not themselves governing. Similarly, the government doesn’t derive sovereignty from itself. The American state is truly a res publica, a “commonwealth” (literally translated), meaning that the people share it in common and care for it together, its qualities emerging from the people’s qualities, for good or ill. They, as our Preamble indicates, “ordain and establish” it, moving the Republic from nothing into something. They also renew it through their participation in it; not just as electors, but as civil servants, members of the military, taxpayers, and in all their other roles as members of the great national, public body.

This popular-orientated design resulted from the American Revolution’s political nature. The Revolution’s primary political goal was establishing a government enabling its constituents (states or citizens) to self-order, hence the initial confederacy.

The Revolutionaries’ actions couldn’t have more firmly rejected the Common Good orientation of government since the Common Good was the aim of the British monarchy (the king was, after all, the head of both church and state: the integralist dream). Had the revolutionaries objected simply to the Crown’s implementation of the good, either the Revolution wouldn’t have been necessary, or they would’ve preserved the British form of government rather than creating something radically different and new.

The colonists’ rejection of this model of government is clear in the Declaration of Independence’s List of Grievances and the General Statement whose three famous concerns, “Life, Liberty and the pursuit of Happiness,” can only be realized by individuals since they are individual and not “common” goods.

The Founders’ emphasis on citizens’ right to organize themselves rather than on a joint common good derived from their knowledge of history and human nature. Particularly, they learned from the previous several centuries of European and English conflict that too many conflicting versions of the common good existed (which was central to their concern about expansive republics). Thus, if one were to create a society where the Good could be realized, that society’s political order would have to be flexible to accommodate a range of activities, i.e., it would have to protect liberty. The fact that different people and even different groups have differing goods shouldn’t be surprising. Though Common Gooders reject it on principle (e.g., Vermeule), Aristotle proves the truth of the matter.

In his Ethics, Aristotle makes clear that happiness is the greatest good, for it’s the only thing people choose for its own sake. He further demonstrates that happiness is “activity in accordance with virtue” while highlighting that different people can act in accordance with virtue to different capacities and in different ways, thus different modes of life and activities are required for any given person to be happy (while the virtues themselves remain constant). Thus, our Founders realized that people require liberty to achieve whatever measure of happiness they can.

Montesquieu, one of the Founders’ favorite thinkers, explains the need for a republic to give liberty in L’Esprit des lois when he discusses the relationship between a republic’s size and its ability to apprehend what is the common good, arguing that larger republics apprehend that good more poorly than smaller ones because of the diversity of their population. The pseudonymous Founder Cato hit this concern squarely on its head when writing that “government, to an American, is the science of his political safety,” meaning that government exists to protect an individual’s liberty from predation, including from the government, while supporting those private institutions that allow them to flourish.

Instead of common good by diktat, early Americans believed that a minimalistic set of laws focused on ensuring a basic set of rights within society would allow civil society to order itself into appropriately arranged groups and thereby achieve whatever measure of good it could. They predicated this plan upon the people’s ability to exercise self-restraint in following the law and wisdom in drafting it and dedication to the principle of self-government (both of the literal self and community), which was the challenge (still highly controversial as the Common Gooders demonstrate) of popular sovereignty. The coordinated functioning of this ideal is ordered liberty.

How do we know the above story is correct? Beyond history and primary-source indicators, the Republic’s four causes demonstrate it. The government is a restrained body, with governing institutions possessing increased authority, not as one ascends the federal system, with most power concentrated in the fewest hands, but as one goes down to the lowest levels. That is the doctrine of delegated powers where states, the smallest sovereign unit, are left to manage their individual common goods. This structure is opposite to what we would expect from a government oriented toward the Common Good, which should be strong to support those policies. One that merely orders liberty, however, should be weak so as not to overwhelm its citizens.

The fact that the Constitution speaks of limitations and is short; separates rather than concentrates powers; makes legislation difficult and forces compromise; reinforces federalism; constricts the power of judges from making decisions through recognizing juries; forces the Executive to consult the Senate and approves only the House to create budgets, indicates weakness rather than strength. If the state were a crusading agent of goodness, this is the opposite structure one would create. If one wished to create a power that could only draft broad laws, would allow citizens to resolve conflicts on their own, and only enact decisions after consensus, it is ideal. That ideal is ordered liberty.

The fact that the people ratified the Constitution, as indicated by the Preamble; elect their representatives through its power; can change the Constitution; there aren’t distinctions in power or dignity among the citizenry; there aren’t qualifications for office based on virtue or even knowledge; the poorest or the richest, the most vile or the most virtuous, remain eligible for office, are proofs that the American government isn’t itself a steward of the good but a protector of the interests of the people to achieve (or not) that good for themselves, which is ordered liberty.

That all of these things add up, when exercised by a virtuous citizenry, to the common good, despite none aiming directly at it. This is the final proof that our order’s end, its final cause, isn’t that good itself, but the ordered liberty enabling people to obtain it. In other words, while the end of our government is liberty, the end of liberty is the common good. Insofar as our government is built to achieve the good, it does so only by enabling liberty. As history has shown, and the greatness of our Republic proves, ensuring liberty is the best way to achieve all the goods, be they common or particular.