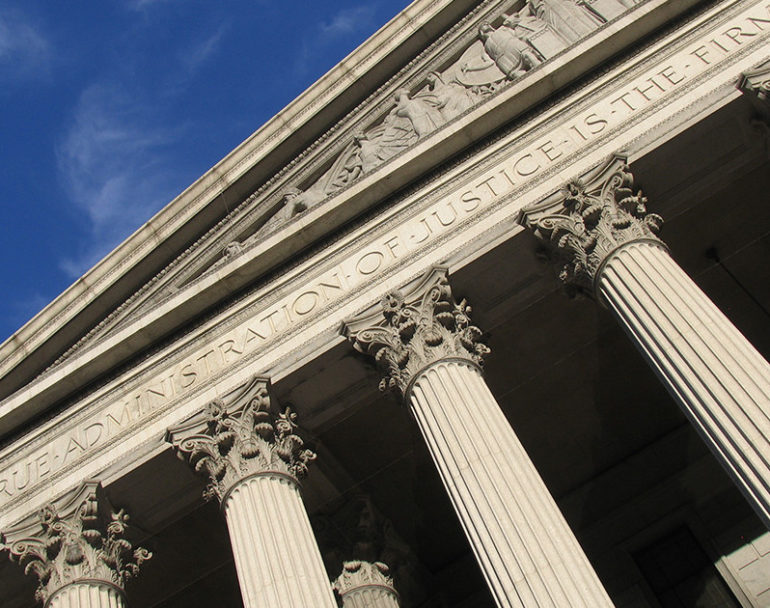 Earlier today, the Supreme Court issued its decision in Murphy v. NCAA. The Court’s opinion was rare in that it not only struck down a federal law that infringed on the reserved powers of the states, but also expanded on the long-standing anti-commandeering doctrine.

In 2014, New Jersey repealed state laws prohibiting sports betting in defiance of the federal Professional and Amateur Sports Protection Act (PASPA). The PASPA mandated that states could not  “sponsor, operate, advertise, promote, license, or authorize by law or compact” sports wagering. The law made an exception for the state of Nevada. It effectively cemented current state laws related to sports betting in place.

A coalition of sports leagues, including the NCAA, Major League Baseball, the NBA and the NFL sued New Jersey, asserting that by repealing its state law prohibiting sports betting, the state effectively authorized the activity, violating PASPA.

The Court agreed that the New Jersey law effectively authorized sports betting and that it violated federal law. But in a 7-2 opinion authored by Justice Samuel Alito, the court struck down those provisions of the PASPA as unconstitutional because they violated the anti-commandeering doctrine.

The Tenth Amendment Center generally advises against a strategy focused on going to federal courts to limit federal power, as it is usually ineffective or even dangerous for liberty. But SCOTUS has been consistently correct when it comes to anti-commandeering.

These opinions provide a powerful tool for states to opt out of overreaching federal actions – including prohibitions on sports betting – and nullify them in practice and effect.

Alito’s majority opinion in Murphy v. NCAA further cements the anti-commandeering doctrine in Supreme Court jurisprudence, and in fact, even expands it.

The plaintiffs argued that the PASPA didn’t commandeer the states because it did not require them to take any affirmative action. They merely had to leave existing state law in place – in effect, do nothing. The Third Circuit Court agreed with the plaintiffs, saying, “PASPA does not require or coerce the states to lift a finger.”

But the SCOTUS disagreed. Alito wrote that the PASPA did, in fact, violate the anti-commandeering rule because it directs the state legislatures by telling them they cannot repeal a state law.

“The PASPA provision at issue here—prohibiting state authorization of sports gambling—violates the anticommandeering rule. That provision unequivocally dictates what a state legislature may and may not do. And this is true under either our interpretation or that advocated by respondents and the United States. In either event, state legislatures are put under the direct control of Congress. It is as if federal officers were installed in state legislative chambers and were armed with the authority to stop legislators from voting on any offending proposals. A more direct affront to state sovereignty is not easy to imagine.”

The SCOTUS opinion opens the door for sports betting in states that want to allow it, but as Ilya Somin pointed out in an article for the Volokh Conspiracy, the case has much broader implications.

“Murphy is also significant for state policies legalizing, under state law, other activities that the federal government may oppose, including marijuana, possession of some types of firearms, and others. The federal government can no longer block such legalization by passing laws that require states to continue to bar these activities under their own laws. In many cases, the federal government can still ban various activities by making them directly illegal under federal law. But if it cannot rely on the backing of the states and their own laws, enforcing such federal prohibitions in dissenting states can be expensive and difficult. In practice, federal prohibition of gambling, drugs and other activities relies heavily on state cooperation and support. Today’s decision reinforces the constitutional rule that empowers states to deny such assistance.”

In another important aspect of this opinion, for the first time, the Court has included a constitutional basis for the anti-commandeering doctrine in an opinion. Alito asserts that the doctrine flows out of the fundamental sovereignty of the states.

“The anticommandeering doctrine may sound arcane, but it is simply the expression of a fundamental structural decision incorporated into the Constitution, i.e., the decision to withhold from Congress the power to issue orders directly to the States … Conspicuously absent from the list of powers given to Congress is the power to issue direct orders to the governments of the States. The anticommandeering doctrine simply represents the recognition of this limit on congressional authority.”

The anti-commandeering doctrine already provides a powerful legal tool that states can use to undermine federal action simply by refusing to cooperate. By expanding the scope of the doctrine and more deeply cementing it into the law, the opinion in Murphy will make it even harder for the federal government to coerce states to bend to its will.

It’s important to emphasize that today’s opinion only happened because the state of New Jersey took the first step and passed a law legalizing what the federal government said was prohibited.

You won’t often hear me cheering for a Supreme Court opinion, but this one on sports betting is a huge win for state sovereignty. And it was only made possible because people started taking action before getting federal “permission.”